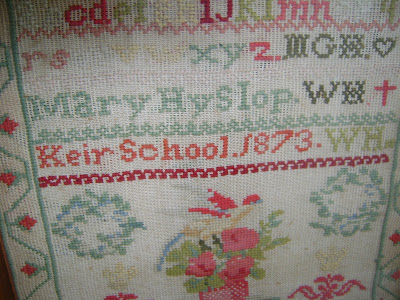 Who is Mary Hyslop?

Spring-cleaning seems to last all year for me so whenever I can find a distraction, well there I go. As it happened, I was clearing out my bookshelves when an obituary of one my paternal great grandmothers fell to the floor. That started my genealogical journey. Soon I came across a name on a death certificate that seemed familiar.


Then came the “aha” moment when one makes a find! Oh! I know that name! I know it! I quickly went and found a sampler that I had carried with me for years, stuffed in an old humpback trunk until, one day I had it framed to protect what I knew was history of some sort. I was troubled for years as to why I had this sampler. Who was this Mary Hyslop? Why do I have this? What was happening in 1873 when she so carefully crafted this piece of work, homage, I later learned, to her parents who had both died by the time she was 14 years old? Was I ever told this story or had I simply forgotten it? 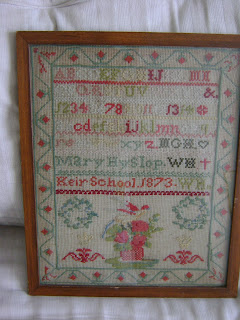 My great grandmother, Mary Hyslop Barrowman Miller became a fixation for me. I wanted to know more about her and my Scottish roots. Childhood memories that linked me to Scotland swirled in my head: remembering blood pudding, big bowls of oatmeal porridge, my brothers and I badly chanting “If you can say it’s a brae bricht moon lich nicht, you’re all right, you’re kin”, Dundee marmalade, trips to the Highland games, my Black Watch Tartan skirt and vest all added to my new found sense of identity.

However, it was my great grandmother’s story that enthralled. Mary, born in England to Scottish parents (William Hyslop and Mary Barclay) lost her mother when she was only 3 years old. She and her younger brother William were sent to Scotland to be raised by Hyslop family members in Keir, Dumfriesshire (her Aunt Margaret Hyslop Halliday and her brother, their Uncle John Hyslop). Her father stayed in Stoke upon Trent, remarried and raised another family.

The sampler revealed some of this story and led me to many discoveries. I was aided in my quest by the kindness of unknown genealogical soldiers who loved mysteries and were keen to help. Through the good graces of one particular friend, now an honorary Hyslop, I began to piece together her story. 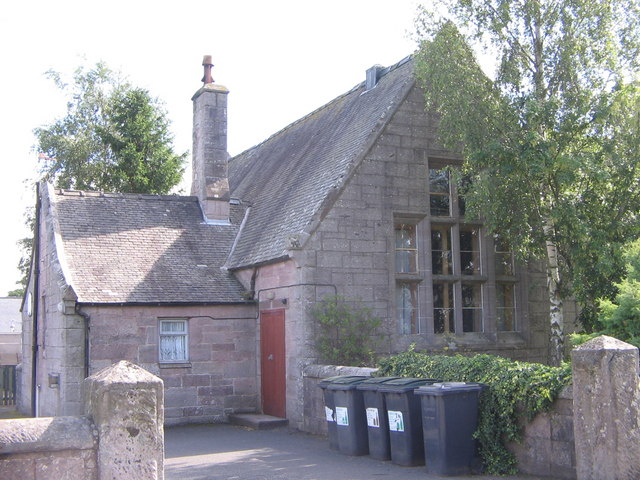 It is an ordinary life in many ways, Mary’s, but to me she is a wonder of strength and determination. She lived in Farthingbank Dumfriesshire (on the Buccleuh Estate, the lands of Drumlanrig Castle) when at 19 she married Alexander Barrowman, Master Flesher. He was from Armadale, where they lived and work. She lost her first child when he was just 1 year old to diarrhea from teething (who could imagine such a loss today
in Canada!). She and Alexander had another son, Robert Barrowman. After losing her first husband to tuberculosis, Mary probably worked as a Flesher and moved from over the shop in Armadale to Glasgow where she married her second husband, Robert Weir Miller. I am struck by her having a profession - “Flesher” – ghastly name for butcher but I hoped that she was really working in the storefront in Armadale and making sausage and pie, not slaughtering, as was likely the case. Both of her husbands were Master
Fleshers so it is likely they owned a business. I hope so. I would rather she not have to have done such hard work.

Mary’s fortunes held until her second husband died of pleurisy when she was just 33. She was living on Greenhill Rd. in Rutherglen at the time. Aha! My link to Glasgow was further explained.

There are many holes in between. In 1901, now widowed she lived in Rutherglen in a tenement house and worked as a dressmaker. Eventually, in 1907, Mary came to Canada, as did both of her two sons. Some of the history is missing but Robert Barrowman went on to become a very prominent citizen, holding the post of Mayor of Lethbridge for some time. He was an accomplished businessman but had an artistic side and painted landscapes. I have been in contact with his great grandchildren and shared Mary’s story
with them.

In Canada, Mary lived with her son James who went on to marry Maude Ellen Tuttle, my paternal grandmother. I believe Mary ran (owned?) a boarding house and soon the Millers and Tuttles combined accommodation at 212 Slater Street, Ottawa, Ontario. James was a soldier and enlisted in the Canadian Overseas Expeditionary Forces in the First World War but it is unlikely that he served overseas. I have looked at his service file (dusty papers almost 100 years old!) and seen that he was discharged on  ompassionate grounds. He died when my father was only 7 years old. Mary never got to see her grandson as she died the year before he was born. She is buried in Ottawa, at Beechwood Cemetery with her son James Halliday Miller.

In 2012, I journeyed to Scotland to see my adopted family in Falkirk, my genealogy angel, Margaret. What a thrilling time. I visited the Dumfries area where my ancestors lived, even driving into the bush that was called High Farthingbank. So much to take in, so much excitement I need to redo the journey now that I have a better understanding of the linkages to the larger Hyslop community. I need to find out more about the Miller side of the family too.

My newest discovery is a Hyslop contact in Dumfries who has a keen knack for uncovering family history and we are sharing our finds. We are not of the same Hyslop line....yet! She has been wonderfully helpful, not to mention a delight to get to know. She has helped me make a family link in Australia. Now I really need a direct family link in Scotland! The Hyslops are many.

I have googled the name Hyslop in the Dumfries area and there are many. It would be so exciting to find a family link there now. Could I actually find photos of my relatives and ancestors? Would one exist of my dear Mary?

Mary is buried here in Canada near her sister in law Mary Jane (Muirhead) Hyslop, her brother William’s wife. I know little of his time here in Canada but think he did not have children and returned to Scotland sometime after his wife and sister had died. He died in 1929, in the Parish of Morton, Dumfries.

I had the sampler reframed – museum quality – safely protected behind glass that will not allow light damage and with acid free matting. It is beautiful. See for yourself. 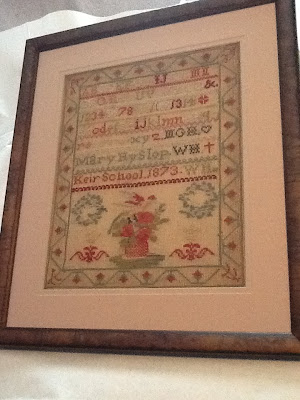 
We are offering free 30 minute genealogy consultations at the 24th Annual Conference of the Scottish Association of Family History Societies to be held at the Scottish Borders Campus, Nether Road, Galashiels, TD1 3HE, Scotland from 10am to 4pm on Saturday 11th May, 2013.

The idea is to help you get over an obstacle, perhaps by directing you to a type of record you haven't used before, or by accessing our vast library to overcome your problem. To enable us to help you, email us as soon as possible to book your time slot and tell us all you know about the family. That way we can have a look over your family before the event.

There are limited slots available, here is what we have left:

Click the link above to email me, tell me the time you would like and tell me as much as possible about your family.

Posted by Emma Maxwell at 06:34 No comments: