In search of the Old Age Pension records - Part One

It was brought to my attention recently that in Ireland there survive records of 'Age Verification' which drew on the 1841 and 1851 census to prove an individual's age so that they could claim their Old Age Pension.

The Old Age Pension was introduced throughout the United Kingdom (which then included what is now the Republic of Ireland) in January 1909. In order to claim, you had to be 70 years of age or older and you would have to prove you were old enough.

In Scotland and Ireland it could be very difficult to prove your age. In Ireland civil registration of births had not begun until 1864 so nobody of pension age in 1909, who had been born in Ireland, had a birth certificate. Although civil registration of births had began nine years earlier in Scotland it still meant that none of the first applicants for the Old Age Pension had a birth certificate.

What was to be done?


This is a very valuable resource in Ireland as in the years that followed most of the 1841 and 1851 census enumeration books were destroyed. The remaining Age Verification forms are a really valuable resource. To read more about this see Chris Paton's excellent blog: Walking in eternity.


In Scotland I cannot find these age verification forms. I have been able to demonstrate (contrary to the belief of some) that they did exist in Scotland and I also have some statistics. Here is an extract from a file held by the National Records of Scotland (their reference is GRO5/778):

STATEMENT showing NO. of SEARCHES in CENSUS RETURNS of 1841 and of 1851 on behalf of the LOCAL GOVERNMENT BOARD in each month from January 1911 to February 1912. 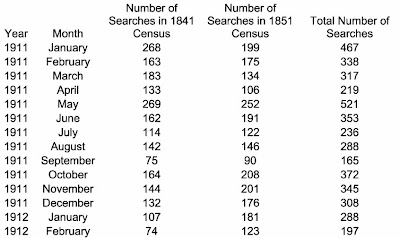 In the same file (GRO5/778) there is also a copy of a question raised by Captain Murray in the House of Commons on 7 August 1912. The question was: “To ask the Secretary for Scotland, whether he can state the number of persons in Scotland who were in receipt of old age pensions on 1st January 1909, 1st January 1910, 1st January 1911, and 1st January 1912.”

If the Scottish Age Verification forms could be found they would be really interesting. Whilst they concern a small percentage of the population, it is the percentage of the population that were struggling during their lifetime, to provide proof of their their age. If you are now tracing your family tree just think how useful it would be to have a record from 1909 for these individuals!!

If you have any insight into what has happened to these forms please get in touch.

Civil registration beginning in England and Wales in 1837 meant that some pensioners had birth certificates, but also the parish registers for the period immediately before 1837 are in much better order than in Scotland and Ireland. It therefore seems that the census was not often (if ever) used for the purposes of age verification.

The Age verification forms should not be confused with the original pension application forms, which every claimant would have filled in right at the start of the process, regardless of whether they had evidence of their age or not. They would be interesting to find too and will be the subject of another blog.

Sale on at Maxwell Ancestry

It’s getting cold outside! The nights are fair drawing in. Time to curl up with your laptop or iPad and get back to your family tree, perhaps work on some of those brick walls.

To help you we are having a sale! I know, I know, we are just too good to you.

As an introductory offer we are reducing the cost of our new paternity case transcriptions from £10 to just £5! We are also offering a discount on multiple orders. If you want 4 cases we will charge just £15 for all 4! Where can you get a better deal than that?

If you are ordering 1-3 just order as normal through the website, the reduced cost will be shown in the PayPal shopping cart.

If you want to take advantage of our multiple purchase discount price email me directly and I will send you a combined PayPal invoice for the special rate.

Over the last few weeks we have been busy adding various indexes to our website. We have now also added some guides and some details about what sources are in our index.

We have a guide for each resource:

If you come up with a question whilst searching please email me and I will do my best to answer it and add  it to my list to help other searchers.

Posted by Emma Maxwell at 06:06 No comments: