While you are researching your Scottish family history you will come across different wordings in the civil marriage registers (marriage certificates) that begin in 1855. These are the ‘Statutory Registers’ which you can search on ScotlandsPeople.

You may also see, ‘By Declaration in the presence of [names of witnesses].” In these cases, you will also see, “Warrant of the Sheriff Substitute of the [name of Sheriff Court]”.

I am including an image from ScotlandsPeople, which shows both of these types of entry on the same page. What’s the difference? Why is there a difference? Will the Sheriff Court records tell me more? 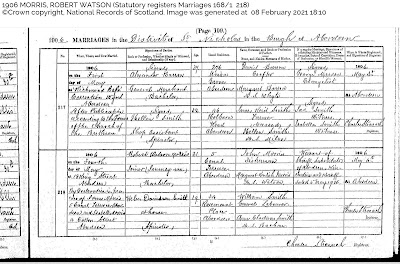 Until the mid-twentieth century, you could marry in Scotland by declaration. What does this mean? Basically, you said in front of witnesses that you were married and that was it; you were married. This was also known as an ‘irregular marriage’ (sometimes also referred to as a clandestine marriage) as opposed to a ‘regular marriage’ when a minister (or clergyman) performed the service.

An irregular marriage was quicker to arrange as the banns were not read. Although used by people throughout Scotland, it was perhaps the convenience of the marriage, along with the lower age requirement for marrying in Scotland without parental consent, that made places like Gretna Green on the border with England so popular for ‘runaway weddings’.

Both of these types of marriage were legal. The Church did not approve of irregular marriages and for that reason these frequently appear in Kirk Session records, but that’s a subject for another day.

Before 1855, when civil registration began, couples could declare in front of witnesses that they were married and that was that.

After 1855, this type of marriage by declaration continued, but how was it to be recorded? To have the marriage registered the couple went to the Sheriff Court to receive a warrant. That warrant authorised the registration of the marriage.

Looking back at the marriage register is helpful here. We often make a dash for the names and dates but always take time to look at the headings. In the case of an irregular marriage, we see under the heading ‘When, Where and How Married’, the words ‘By Declaration in the presence of [names of witnesses].’

Another column heading is ‘If a regular Marriage, Signature of officiating Minister and Witnesses. If irregular, Date of Conviction, Decree of Declarator, or Sheriff’s Warrant.” Again in the case of irregular marriage, we usually see it completed, ‘Warrant of the Sheriff Substitute of the [name of Sheriff Court]’.

Are there corresponding records kept by the Sheriff Court?

Yes. These can be helpful, but not usually. Surviving records are generally found in the ‘Diet Books’ or ‘Minute Books’ of the sheriff court and are usually quite brief. In the example shown here, we see that the only extra information we are given is a bit more detail about the witnesses. I would never say not to follow the paper trail, just don’t get your hopes up. 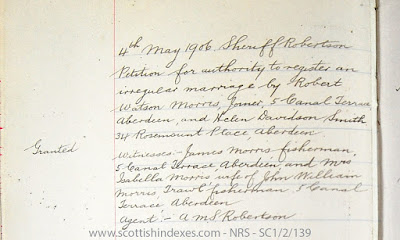 Of course, there are often surviving church marriage registers post-1855 too which are occasionally useful. In general though, the information in the marriage register you can easily access on ScotlandsPeople will tell you just as much, if not more, than the corresponding church records. If you are up against a brick wall and can visit the National Records of Scotland, look at everything you possibly can.

Were all irregular marriages after 1855 registered?

There is evidence that they were not. I would like to do further study into this but occurrences in the Kirk Session minutes of the parish of Canonbie have been noted where a couple were reproved by the Kirk for being irregularly married and no corresponding record can be found in the marriage registers on ScotlandsPeople.

Keep learning about Scottish genealogy by attending our free Scottish Indexes Conferences. The next is scheduled for 22 May 2021. 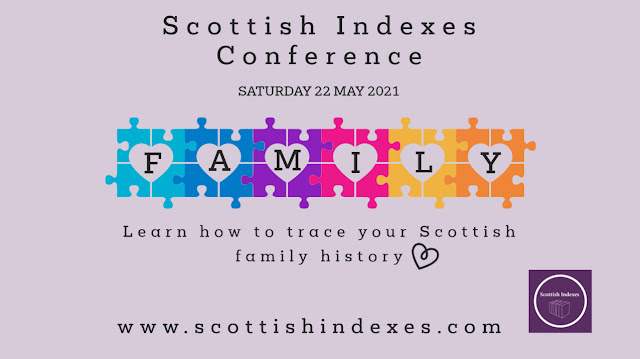 Posted by Emma Maxwell at 04:49 No comments: