Smallpox in the National Records of Scotland

Smallpox is a word that has inspired fear for generations. Our ancestors suffered with little help and it was not until the 26th of October 1977 that the world’s last naturally occurring case was discovered.

We are the product of generations of ancestors who survived long enough to have children, but we know that sadly many of our ancestors’ siblings did not survive. It is rare to find detailed health records of our ancestors, so although we might theorise that they endured diseases such as smallpox we do not often have any evidence one way or the other. 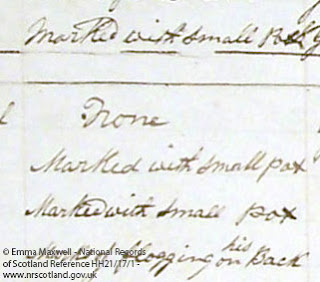 Clues do exist, though, if you know where to look. One interesting source is the prison registers held by the National Records of Scotland. Victorian prison records are very detailed, and one of the columns on the registers was headed ‘Marks’. In this column, as well as finding details of tattoos or scars, we commonly see written ‘pock marked’, ‘poxpitted’, ‘pock pitted’ and even ‘Marked with small pox’. A person could become pockmarked by various skin conditions, but smallpox was a major cause of such scarring. Depending on the description used, it can be very clear that they suffered from smallpox at some point in their life, information which may not be found in any other record. The image to the left shows William Phillips and Betsy Phillips are recorded as being marked with the smallpox in an 1848 prison register; you can search an index to these records on our website.

Another source of information is the Kelso Dispensary patient records, which are also held by the National Records of Scotland. These records provide a fascinating glimpse into the history of smallpox. Founded in 1777, this charitable institution saw patients with many ailments, and smallpox is frequently seen in the records. Between October 1793 and October 1794 the Dispensary saw 29 cases of smallpox, with one case resulting in death.

The records of the Kelso Dispensary document many cases of smallpox. Above we see an entry for Thomas Tenant who died of the disease in 1797. This entry is again from the National Records of Scotland, their reference number for the document is HH71/43.

In 1796 a physician named Edward Jenner discovered that infecting someone with cowpox gave them protection from the much more dangerous smallpox. This was effective because when a person was exposed to cowpox, the human body produced antibodies which helped protect them from smallpox. This was the world’s first vaccine!

The vaccine came too late for poor Thomas, though. Just a few years later, on 10 August 1800, we see the first entry of smallpox inoculation by the Kelso Dispensary. Sadly the names of the children are not listed but these ten children surely have a place in history.

As with many new ideas the smallpox inoculation (or vaccination) was not universally accepted. Cartoons of the time depict the fear that the public had at the time, that somehow the cowpox may turn them into a cow! Science prevailed however and the results were clear. In time an improved vaccine was made and the rest, as they say, is history. This terrifying disease now only exists in laboratories, let’s hope it stays that way!


When researching our ancestor’s past we are not content with a lists of names, dates and places, we want to dig deeper and understand the people we are descended from. By looking at a variety of records you can do that too. We are working on a project to index Scottish prison and health records so that you can trace your family tree and find out more about the people behind the names, including the diseases they had to endure. Search www.scottishindexes.com for the names of your ancestors and discover more about their lives.